Every summer, hundreds of thousands of people road-trip to see Zion’s amazing canyon walls, Yosemite’s breathtaking granite domes and the snow-capped peaks in Rocky Mountain National Park. But our nation’s stunning parks don’t stay wild and healthy on their own. There are people who work really hard behind the scenes to protect national park history, culture and the natural environment. Here are some fascinating stories about people who live in and near six parks.

Find out how Yosemite ranger Shelton Johnson brings to life the little-known history of Yosemite’s first Black rangers and how he convinced Oprah to visit the park. 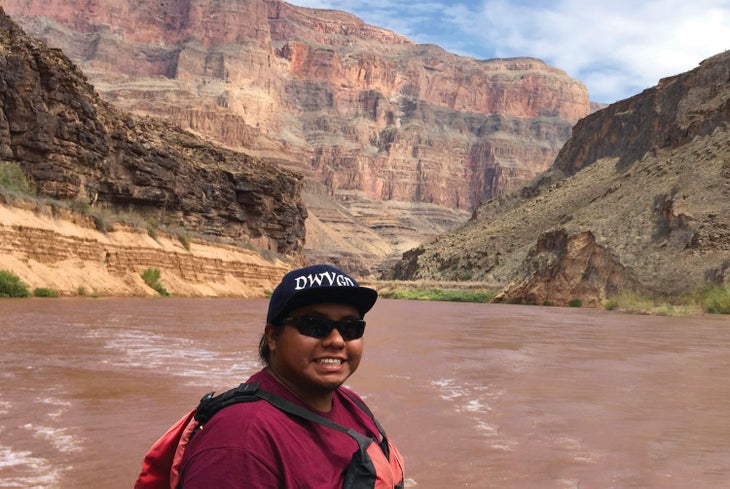 Strong enough to hold seventy-one 747 airplanes, Grand Canyon West’s Skywalk opened in 2007 on a sacred but rarely visited dry corner of the Hualapai reservation. For Luka Montana, it led him back to some of his tribe’s deeply rooted cultural traditions.

The Coast Salish people have been working to return salmon to their historic spawning grounds across the Pacific Northwest, including Olympic National Park. Valerie Segrest explains how the return of the salmon is a key step in tribes acquiring food sovereignty.

In a mere 18 months, Rocky Mountain National Park has experienced record levels of visitors, a global pandemic and two of Colorado’s largest ever fires that burned 10 percent of the park. Its first female superintendent Darla Sidles may be one of its boldest leaders yet.

Growing up, Talia Boyd lived on the Navajo Nation near a former uranium mill. She remembers the kids she’d ride the bus with playing on top of the unfenced piles of tailings. Today, she’s working to stop the expansion of uranium mining three miles from the boundary of Bears Ears National Monument in Utah.

Jessy Stevenson has deep ties to the Badger-Two Medicine area bordering Glacier National Park from her family’s Blackfeet heritage as well as her ancestors who helped run the park. Today, the Blackfeet and conservationists are fighting to protect Badger-Two Medicine and restore the tribe’s rights to co-manage it.

Without hemlock trees, known as the “redwood of the East,” Great Smoky Mountains National Park’s forests could be losing one of its most important tree species and the ecosystems that they support. Jesse Webster is helping to win the war against a pernicious army of tiny insects.

Get inspired with tips about where to go and what to see on your national park vacation, delivered right to your inbox. Unsubscribe anytime by clicking the link at the bottom of your email.

Rent an RV and Get Outdoorsy